If you know anything about Hip Hop in the 80’s, 90’s and early 2000’s, you’ll relate to this visual treatment by Scout’s Honor Media Co. on so many levels.

Though it is funny–very funny– it isn’t just silliness. The video shows the way Stephen the Levite—real name, Darrell Bell—once responded to Hip Hop as a culture-controlled trend-follower, rather than a counter-cultural Christ-follower.

The five-minute video features everything from break dancing to pop locking, swinging nun chucks to DJ’s scratching turntables—a spot-on portrayal of the times.

Get into it and enjoy!

Purchase Stephen The Levite’s Can I Be Honest On iTunes 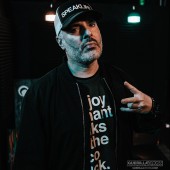 Kwon Five-Nine is owner and co-founder of GuerillaCross.com as well as the SPEAKLIFE Radio Show. He has been involved in Christian Hip Hop since 1993 when he started rapping and has been heavily involved each year since. Starting in 2002, with "ONE80 Hip-Hop Show," a live concert series, Guerilla Cross has grown into a brand that services in concert promotion, event hosting, an online hip-hop magazine, radio, media, ministry, etc. Based in Las Vegas, NV, Kwon Five-Nine has been a pioneer in the local CHH scene, evolving from local to international events and talent management. Kwon has worked with such labels and artists as Humble Beast Records, Propaganda, Bizzle, KIDD, JGivens, Dre Murray, Lamp Mode Recordings, and Collision Records. Kwon is also a recording studio engineer with nearly 15 years of experience, as well as a 5 years experience as a professional web developer and graphic designer.