Reach Records artists Trip Lee and KB are currently on The Rise Tour, which will go to fourteen different cities. Jam the Hype was able to interview Trip Lee about his most recent release, and associated book, Rise: Get Up and Live in God’s Great Story, as well as a little bit about the tour.

Rise: Get Up and Live in God’s Great Story was released on January 27, just three months after his bestselling album, Rise, came out. The album charted #2 on Billboard Rap Albums and #16 on the Billboard 200. The book is Trip Lee’s second, having written The Good Life in 2012 alongside the album of the same name.

“I think the main inspiration was seeing both, in young people and a culture that speaks to young people, the same kind of general idea that, while we’re young, it’s just a time for us to just kind of chill and do nothing,” said Lee when asked what inspired the book.

I wanted to say that God created us to play a role in a big story, and that role has already started because He already created us.

Lee believes that this generation of young people does not have a clear picture of what their lives are supposed to be. The messages that our society tells us are to have fun and enjoy living for you.

A lot of leaders and parents even in our churches are preaching this message. Lee mentioned that as a teenager he “benefited from being a part of a youth group that was fun, but the youth pastor preached God’s word and helped us to grow.”

Lee has another pastor besides his youth pastor who influenced him a lot: John Piper. 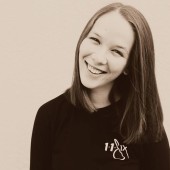 Melanie is the Reach Records Liaison for Jam The Hype, handling and maintaining the relationship between Reach Records and Jam The Hype. She is a student at the University of South Florida, majoring in Mass Communications with a concentration in public relations. She has loved Reach Records music since she was 12 and has since established a substantial reputation as their biggest fan.