IMPORTANT NOTE: This video does not attempt to affirm or deny the validity of the scientific theory of evolution. Evolutionary language is used primarily as a poetic device to illustrate larger issues concerning human nature. 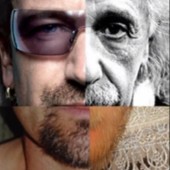 Phievalon is the stage name of spoken word artist Phil Long, aka Liar Lunatic, aka The Poet Formerly Known As Dad. He is a content curator for Jam The Hype's Spoken Word/Artistry page. He has been intimately involved in the spoken word poetry scene at large for over 5 years, competing in poetry slams from coast to coast. He has performed for audiences from 50 to 50,000 and is passionate about performing and promoting spoken word poetry that gives voice and witness to the hope of the Gospel in the fullness of the language of culture and human experience, while reaching beyond the often myopic pretense and insular language of an increasingly isolated Christian subculture. He is the founder and acting director of ‘The Sacrificial Poet Project,’ leading and shaping new growth in its mission to "promote faith conversations through the art of spoken word poetry.” He is a member of the Luis Palau Association's Next Generation Alliance, a member of its Creative Arts Alliance, and on the CRU Speakers Forum. He has collaborated as a speaker and performed in prisons with Prison Fellowship, at private and secular universities, in the Faith & Culture Writers Conference and Portals Writers Conference, and has written, produced, and performed "Liar Lunatic," a one man spoken word theatrical production at the Headwaters Theater in Portland, Oregon. He is informal poet laureate for the Discovery Institute's Center for Science & Culture. His current production "CosmoLyrical; what if it's all poetry?” (on tour) is a continuous, epic, 7077-word performance poetry piece that is like listening to Shakespeare do Hop Hop for a Las Vegas nightclub TED Talk. His poetry is a mixed-martial metaphorical brain ride for the gypsy hopeful. He has also released a poetry book by the same title containing the entire lyrics of CosmoLyrical, available @ CosmoLyrical.com. His day job is piloting Boeing 777s worldwide over oceans for a major commercial airline.

Why I Hate Religion, But Love Jesus – Jefferson Bethke