In an effort to give CHH an element of Hip Hop it’s seemed to have been missing at least on a large scale, Flo and Threat have teamed up to make a collaboration mixtape in which both artists bring out the best in each other lyrically and creatively. While both artists are solo artists, Threat and Flo wish to inspire Christian artists to come together. The Team Up mixtape is not only a collaborative of tongue twisting lyrics, thought provoking concepts, and even a few original productions, but it is a trendsetting example of unity in the body of CHH.

The last single off the Team Up mixtape “The Reason” is quite possibly the biggest single yet. Both artists speak from personal experience as they air out some of the ongoing issues in CHH today. No doubt a game changer, The Team Up is unlike anything CHH has ever seen before! 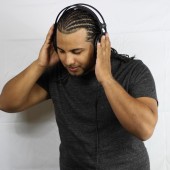 Jorge Arevelo is a Washington D.C. native formerly known for putting on Christian reggaeton events throughout the metropolitan area. After his relocation to the Latin American music central point, Miami, J.Velo gained a wealth of experience working with and developing local artists while associating with some of Latin music's most influential artists to date. Velo's vision is to expose the Christian Latino talent to mainstream America and share the gospel through Latin music and Christian Hip Hop.