“Man Up” 10 responses to a poem I heard last week.

2. All you men who are too busy Manning up to take responsibility for your drunken baby making. Cant seem to get out of your parents house but somehow came up with the money to terminate that human being. Man Up!

3. To the ManUpUlators who have lowered the bar to get money, sleep with every girl who will or won’t, basically do whatever you think will make you feel like a real man. Man Up!

4. If your idea of a date is meeting her in the VIP of a strip club, picking her up at one of our beautiful casinos lounges or finding her on craigslist. Man Up! its bad enough theres a guerilla pimp who wont let her come home without at least 2 racks. and you just have to participate in the demand for this supply. Man Up!

5. To the high school boys who claim to be young men telling your girlfriend “Baby, You know I love you.”….. yeah right as this is being said from Whatshisfaces bathroom during a keg party. Man Up and have someone respect for the body you are about to ManUpUlate into sin for your own pleasure.

6. If you cant remember the last time you gave someone a compliment, like really stopped someone, looked them in the eyes and said something like “You are a future world changer and a nations history is effected by your actions.” If you’ve never said that to someone, Its time to Man Up!

7. I have 3 sons who I vow to daily embed a sense of honor and respect for women first hand by the example on how I treat their mother like she is the most beautiful woman in the world and to me she is. Man Up son!

8. I also have 1 daughter, 1 precious daughter who I vow to take out on Daddy date nights monthly. To show her what a date really looks like and how a man is supposed to treat a real woman. I know theres a father to a daughter in here and its time to Man Up.

9. This message is not just for the men but also the ladies, you see when God created eve and brought this beautiful bride to Adam he took one look at her and could only say one thing. “Wo-man” and as she stood there ready for baby making and Adam responded. Surely a man will leave his father and mother for her. Wo-Man Up!

10. To all Man and Wo-Mans its time that we realize that none of us have ever manned up to the standard of perfection God requires. Yet because God loves you so much He sent himself as a man to Man Up on a cross to bear the sins of the world and lift man up to a relationship unattainable by your own man up efforts. So put your old man down and pick the new man up for creation eagerly waits for the Sons of God to be revealed and speak life into this broken world. Will you Man UP! 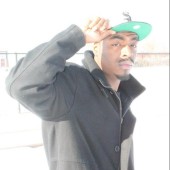 Karl McMichel serves as a member of the music video promotion team for Jam The Hype. Karl puts his many gifts to use through social media, music videos, and community activism for the glory of God. Karl has also served as music and tour promotions for Reflection Music Group as well as being the coordinator for the Higher Learning Tour for Nashville, Tennessee.