Shared Burdens – Living A Life With Tedashii, ‘Below Paradise’

“So do not fear, for I am with you; do not be dismayed, for I am your God. I will strengthen you and help you; I will uphold you with my righteous hand.” – Isaiah 41:10

This weekend I was fortunate enough to be asked to write my first album review for Jam The Hype. I had never done an album review before so, needless to say, I felt less than adequate to be giving my opinion on another man’s artistic work. However, when my best friend, Chris Lassiter, called me and pitched the project to me, I felt even more compelled to review the album as it has an indirect tie to my life.

Reach Records artist Tedashii is scheduled to release his latest album at the end of this month. After reading some information on the project, it quickly became the most anticipated album of the year for me. I felt like this album would be the one that could be used for the soundtrack of my life.

Tedashii appropriately named the album Below Paradise. It was in this title that I knew a man’s heart would be revealed to the world. I also knew that I was going to share similar views with the man behind the album.

In 2013, Tedashii experienced what I believe to be the worst pain known to human kind; he lost a child. How can I say this is the worst pain known to us? I’ve lived it. I’ve been through it. In 2007, I lost my son and there are no words than can adequately describe the hurt that this brings. There are also no words that can adequately describe the questions that arise after such a life-changing event.

I don’t know the entire backstory to Tedashii’s tragedy, but I can feel his hurt through a track on Below Paradise simply called “Chase.” Every word written in that song brings me back to that fateful night in 2007.

It was the day after Christmas and my son was in the pediatric intensive care unit at a local hospital. My wife and I were taking turns staying with him through the holidays. I can vividly remember opening his presents for him and then reading him the story of the birth of Christ. I remember the look he gave me when I told him of why Christ died for us. And as I look back, I see my son’s eyes staring back at me as if to say, “Dad, don’t worry, I know the one and only true God, and He’s got me.” After playing with him and singing some worship songs with him, I laid down on my makeshift bed beside him. Little did I know, in a few hours the Lord would call him home.

So, with that, I can understand the emotions and feelings that T-Dot is conveying in the song. I have lived through and have felt those same things. I have felt the same pain. I have the same regrets.

Let me be clear, the pain never goes away. There is a constant hole in your heart when you lose a child. You question why God would let something happen to such an innocent child. I still have family members that have lost their faith in Christ after the death of my son. But I also understand that all things work together for God’s glory. I don’t understand it, no more than Tedashii understands it, or no more than you may understand it. All we can do is be faithful to what the Lord called us to do.

I have no doubt that during the loss of my son that I was simply an open vessel that the Lord could use. You cannot get through that pain without having Him take control. You walk around in a daze, a fog and don’t have a clue where to turn. So, you turn to Him and let Him take you where He wants you to go.

I don’t know how I spoke at my son’s funeral and gave the glory to Christ all while grieving inside. The only way I can explain it is by saying that it was not I but Christ in me. Man cannot do that alone. I don’t know Tedashii personally, but I can bet you that he had a similar experience during his loss.

If I was a rapper then Below Paradise would come about as close as possible to expressing the vast amount of emotions I was feeling.  The album also touches on the divide that was struck between my wife and I for a short amount of time after our son’s death. But the album doesn’t stop there. It provides the answers to how one can manage living through such a terrible event – turning to Christ and leaning on His words and wisdom. In a nutshell, I can feel Tedashii’s plight through his album because I’ve lived a lot of what he is expressing through his music.

I understand the anger at living in this world that is below paradise. I understand the hate that is geared toward the world system that is grossly unfair and undermines all of God’s commandments. I understand looking in the mirror and trying to pretend you’re someone else, trying to fake it as if you have it all together like God wants. That’s why I feel that Below Paradise will likely be the most realistic album you will find on store shelves this month. It is a picture into a man’s soul. It is heartfelt and genuine. There is no hiding behind a mask. Tedashii opened himself up for us to see, and I truly believe the Lord will use the work to further His kingdom.

My hope is that you don’t view this column as me selfishly trying to generate interest in my life and what I’ve lived through. I also do not want the column to take away from a beautiful piece of artwork in Below Paradise. My only hope is that you realize that yes, life in this world can be hard. It can hurt, and it can lack clear understanding. But, please know, that by placing your trust in the true and living God that you can overcome the world and the problems and pain we experience while visiting. This is not home for us. This is not our home. We are below paradise, but one day we will inherit the paradise promised to us, so I implore you to put your faith in Him. Confess your fears, pain, and anger to Him and He will guide you, and He will give you the ability to not only live below paradise but to affect this world for His glory. He did it for me, and I believe He’s doing it for Tedashii through his latest album. Don’t let the world steal your magic. 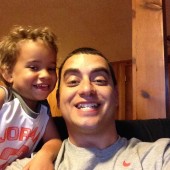 Jeremy is currently a Physical Education teacher and a licensed educational administrator. He is a former college basketball player who later became a state championship-winning high school girls' basketball coach. Jeremy has also traveled the country as a basketball skill-development trainer, speaking to and training athletes of various levels. In addition to his teaching and coaching background, he has also written articles for the sports video gaming website, Operation Sports, and the New York-based basketball magazine, Bounce. His main interests are composed of Christ, his family, basketball, hip-hop, cycling, and all things Philadelphia Eagles. These things, along with his bi-racial heritage, led him to create The Mixed Bag, a blog about a plethora of things. When not involved in any of the aforementioned interests, you can find him hanging with his wife, Erin, and their two sons, Jaxon and Thadaeus.