Jered Sanders released a surprise EP for free on Friday, November 25th, known as Black Friday! The EP itself is titled ‘Black Friday,’ and the reason for naming it Black Friday is quoted from him below:

I’ve always felt like I was commissioned to speak truth to power and be a light in dark places. Even as a young’n, I felt like I was out-of-place from society’s norms. Traditionally, “Black Friday” is considered a “retail holiday” in which people all over the country flock to their closest outlet, department store, or mall to spend their hard-earned money on a few heavily discounted items in order to toss, give away, or add to a neighborhood yard sale batch some time later.

Retailers also prioritize this day to be the one day of the year in which their profits can bring their businesses into the financial “black” (code for being out of the “red” – synonymous with financial troubles). It’s viewed as a time of financial prosperity and growth.

This year though, the day came to have a newfound significance to me. After turning on the news and watching recent political and social events transpire, I became grateful. I became humbled. I began to revere the hope I’ve found in Jesus so much more. Had it not been for THAT fateful “Black Friday,” I wouldn’t know where I’d be.

Had it not been for that fateful Friday, I’d have had no savior to bear the burden of my sins. Had it not been for that Friday, I wouldn’t understand the liberty given through Christ’s sacrifice. In that liberty, I can find joy in the midst of sorrow. America has given me much to grieve about in my years of life extending from greed, lust, envy, capitalism, sexual immorality, hate, violence, bigotry, slavery, and many other things. But in the midst of it all, God has been faithful and is STILL offering a place in paradise for them who believe.

P.S. – There’s a hidden sneak peek to the first single off of my upcoming album, “Nobody Famous” (feat Shiwan), at the end of the EP (approx 4:10). Stay tuned, ya’ll. There’s still work to do. 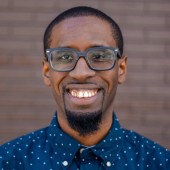