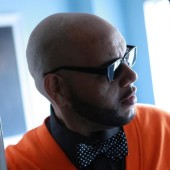 For over a decade, Manuel “Jblaze” Garcia was the host of FNFLive, an Urban Latino Christian radio show based in Miami on La Nueva 88.3 FM. He is also a contibutor for JamTheHype.com, one of Christian Hip-Hop’s largest websites. Jblaze is not new to Urban Latin music. He has been spinning faith based Urban Latin Music for over eight years on La Nueva 88.3 FM. He has helped promote some of the biggest names like Funky, Manny Montes, and Redimi2 through his radio shows and other platforms. Garcia has a passion for the movement beyond just music and ministers in the city of Miami on a consistent basis through a bilingual ministry called The Shift.

Ariel Kelly On The Streets Of DR