Dru Bex releases his for single “Goin Up” his ode to the Bay Area and the first single off of his upcoming EP “Imperfect Messenger“.

Dru shares, “When I first heard the instrumental, I was reminded of the Bay Area sound which I love so much and I knew I wanted to try a different flow on this one. I wanted to make a fun track that celebrates my joining the label (Role Model Records) but also had a message. The message is, when you become a part of “the team”, meaning a part of the family of believers, your movin’ on up in life, even if it seems like that’s not the case. God’s eternal promise is like the ultimate insurance that you can’t lose. And then of course, one day the saints actually will be goin’ up to meet him in the air. Party!!!!!”

Download for free at www.rolemodelrecords.ca or support Dru Bex by purchasing at iTunes & other digital retailers.
https://itunes.apple.com/us/album/imperfect-messenger/id980752607

What do you think of this new track from Dru Bex? 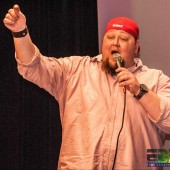 Is Nak Daniels Next From SOFLA? (AUDIO)

Marty – The One With The Villain