On October 28th 2014, Trinidadian born & Brooklyn bred MC/lyricist/songwriter/vocalist/producer Conquest will release “Black Hoodie Rap”, the official radio single & third release off his 6th studio album Radical Thinking 2819 due November 11th 2014. Produced by his Midwest based production team known as Beat Council, “Black Hoodie Rap” is what Conquest calls “Revolutionary Alternative Trap Muzik” with it’s progressive take on the ‘trap sound’. It’s ‘NYC hip-hop meets Stadium Rock’ feel & it’s messaging that addresses the judgmental stereotypes or perceptions placed on upstanding & forward thinking people (including Christians). This is based on their style of dress that may have been inspired by hip-hop, rock or hipster culture. With outspoken lyricism delivered through double & triple time rhyming, “Black Hoodie Rap” was highly inspired by shooting death of Trayvon Martin & enforces the belief that God chooses to empower his people through the gifts & the purpose he gave them & not solely through their appearance. 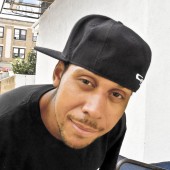 Michael McPherson, a.k.a Mike Mack, is the CEO of ChurchBoy Clothing and subsidiary, ChurchBoy Clothing Entertainment. A CHH promoter in the mean streets of Boston since 2007, he has helped lead the charge in the revolution of how the Christian and local Boston community view CHH. Joining forces with Jam the Hype in 2013, Mike has a passion for seeing Christ glorified, believing that CHH is a perfectly viable tool to do so. An experienced public speaker, manager, leader, marketer, and promoter, his only desire is to use his gifts to promote the Kingdom.